“ subtle tension is spun through carefully
measured emphasis and silence, and all with a
hugely sensitive chamber awareness
between ensemble and soloist ” 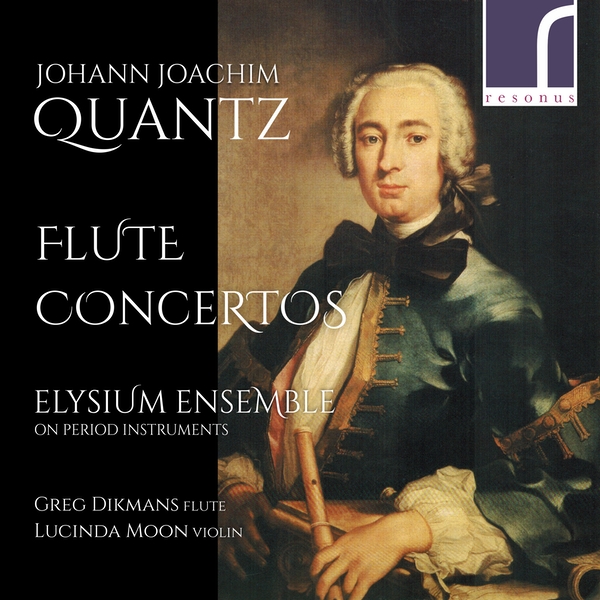 Following critical acclaim for their series of duo recordings for violin and flute on the theme of The Art of Elegant Conversation, period instrument group the Elysium Ensemble returns to Resonus with an expanded lineup to present an arresting and vibrant new recording of flute concertos by the Baroque composer Johann Joachim Quantz.

With Elysium founders Greg Dikmans (flute) and Lucinda Moon (violin) as soloist and leader, the Ensemble breathes fresh new life into these striking and beautifully crafted works with performances that are at once filled with a compelling spirit and warmth.

Australian early music group the Elysium Ensemble continue their series of recordings of duos on period instruments focussing on the Art of Elegant Conversation in the Baroque with this album of canons and fantasias by Georg Philipp Telemann.

Based around the Melodious Canons published in 1738 in Paris, Elysium principals Greg Dikmans (flute) and Lucinda Moon (violin) introduce a selection of Telemann’s solo fantasias.

Following on from their critically acclaimed Resonus debut of duets by Johann Joachim Quantz, the second in a series of releases based on research into historical performance practice sees the Elysium Ensemble record an album of the Six Sonates, Op. 51, by Joseph Bodin de Boismortier (1689-1755).

Prolific in his lifetime, publishing over 100 collections of Suites, Sonatas and other instrumental music, Boismortier’s great depth and imagination comes through in these duos for flute and violin brought to life with panache by the Elysium Ensemble’s principles Greg Dikmans & Lucinda Moon.

“ The Baroque music connoisseur looking for refined and
expertly crafted performances of neglected musical gems
will find this recording an unalloyed delight. ”

Previously unrecorded as a complete set using Quantz’s preferred instrumentation, the Sei Duetti, op. 2 (Berlin, 1759), are works of high quality and interest. Quantz presents his musical ideas as a continuously evolving conversation. They embody wonderfully the idea of Dialogue: The Art of Elegant Conversation.

These historically significant works are excellent examples of Quantz’s intermediate position between the Baroque and Classical periods. They deserve to be heard by a wider audience.

The title ‘Venice to Versailles’ evokes the idea of a journey or the movement from one place (or state) to another.

The works recorded here certainly present an intriguing musical journey through the diversity of Italian and French instrumental chamber music of the sixteenth, seventeenth and eighteenth centuries: sets of variations on vocal works and ground basses, dances, sonatas and suites.

On another level, the affections or passions — universal states of the soul, such as rage, melancholy, joy or mystic exaltation — of the attentive listener will also be moved.

Venice and Versailles were two of the most important centres for the arts in Europe during the Baroque period. They represent the two dominant and contrasting styles of music: Venice the robust, joyous exuberance and barocco (‘wild’ or ‘grotesque’) character of the Italian style, and Versailles, the refinement, delicacy, elegance and douceur (‘sweetness’) of the French.

Bedroom of the King

French Baroque chamber music from the court of Versailles and the salons of Paris. La Chambre du Roi, literally ‘the bedroom of the king’, evokes the intimacy, delicacy, refinement and, above all, the douceur (‘softness’ or ‘sweetness’) of French chamber music of the early 18th century.

François Couperin and Jacques Hotteterre, two of the most famous musicians of their time, were both members of the Musique de la Chambre du Roi, that elite company of musicians who performed for Louis XIV in his private apartments at Versailles.

This is the music of elegant conversation that, with the natural charms and sensitivity of its melodies and the classical beauty of its forms, delights the intellect and moves the heart.