The recording Johann Joachim Quantz: Sei Duetti (1759) is the first of a series to be produced as part of an Historical Performance Research Project. The project was initiated in 2010 by the Elysium Ensemble’s principals, Greg Dikmans and Lucinda Moon. It is being supported by private and corporate sponsors.

The aim of the project is to identify neglected or newly discovered chamber music from the Baroque and early-Classical periods (1600–1800) with a view to bringing it to a wider audience through historically informed performances and recordings.

An important aspect of the project is to dedicate time to experiment with, explore and reflect on the music in a way that is not often possible in the hectic life of professional music making. 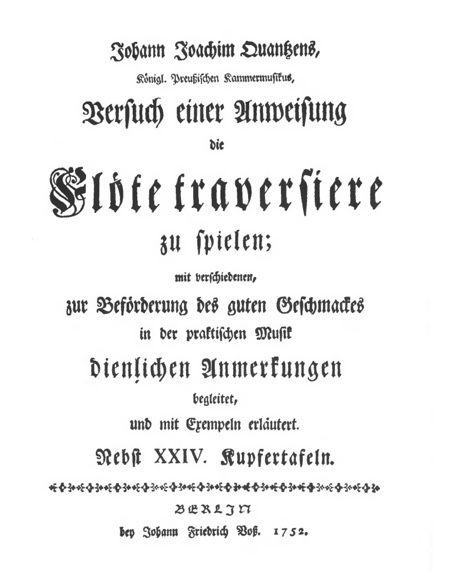 In the first year of the project we decided to focus on Johann Joachim Quantz’s Versuch (1752), his famous treatise on 18th-century performance practice, applying his ideas to his Sei Duetti (1759). This was a treatise we had both studied when we began our journey into historically informed performance and it was very stimulating to revisit Quantz in the light of many years of performing experience. Edward R. Reilly (the translator of the treatise into English) was calling for exactly this sort of study at the time his translation was first published in 1966.

Quantz seems to be more often quoted than truly understood. Barthold Kuijken in his Introduction to a facsimile edition of Quantz’s Versuch makes some pertinent observations that have inspired us in our work:

“Quantz says”, “According to Quantz, one should”, “In Quantz one can read” — how many times have these words been uttered by generations of performing artists, musicologists, teachers and students? And with what results? Is the Versuch … really so important? Is Quantz really to be seen as the main authority of his time … And finally: what kind of music do his directions apply to?

Whoever wants to go beyond simple quotations and catchwords has to ask himself these questions over and over again. But many answers are possible, since they depend on the level of one’s own musical proficiency and evolution, and on one’s knowledge of the historical circumstances.

Another inspiration for our ongoing work are the ideas presented in the following passage from Quantz and his Versuch: Three Studies (1971) by Edward R. Reilly:

Quantz most obviously differed from his immediate predecessors in his refusal to content himself with oversimplified generalizations that ignored the complexity of the process of giving life to music in performance. If we are fully to grasp what he has to say, we must first understand that he was the product of a certain time and place and the advocate of a certain style of performance and composition, but in addition we must also do him the justice of refusing to compromise his ideals either through over-simplification or through the creation of a musical dogma when none was intended. For beyond the details of musical execution, Quantz’s work presents us with a view of the knowledge, sensitivity, and dedication needed to achieve musical artistry from which we still have much to learn.

Historically Informed Performance
what it is & info about Quantz’s Versuch

Elysium, or Zen and the Art of Early Music
life, the universe & performance practice